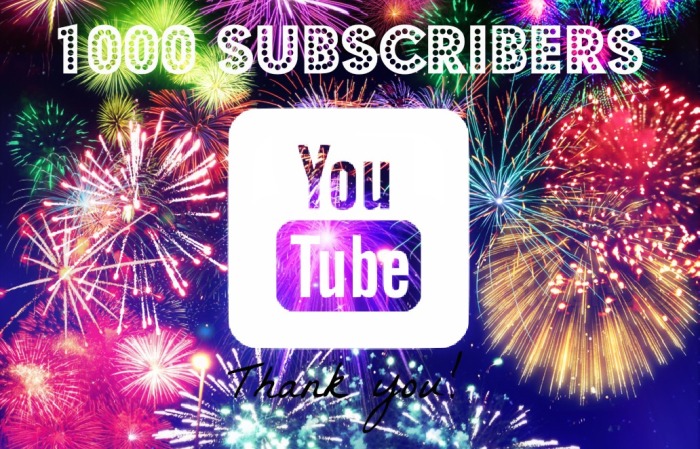 SO, I’m casually browsing around the interwebs this morning and to my shock and surprise discover that 1000 of you fabulous folk have subscribed to my little corner of YouTube! Naturally, such a revelation caused for celebrating with a mars bar square and cup of tea… aren’t I just the modern day party animal!!

So thank you, thank you, THANK YOU! All those that have taken the time to stop by my channel, watch a video, leave a comment, hit the like button and of course (the golden ticket) subscribe. Like most YouTubers, taking the plunge to launch a channel wasn’t an easy step – my nerves were as solid as grated cheese as beads of sweat lashed from my forehead at the mere thought of a nasty comment (I’ve had a few but life goes on)… isn’t the block button a wonderful invention chums?! 😉

Thinking back to my very first video I almost cringe at how horrendously nervous I was. Revealing my blog to friends and family was one thing, but actually putting myself out there on YouTube was something else as a whole new world of realisation dawned… it isn’t like taking a selfie; you can’t sit still and hope for the best angle… everything is on show! Looks, personality, surroundings. Not that I’m in any way ashamed of myself, how I act or the home I live in – but there’s always that looming fear that some nasty critter stumbles across your channel and leaves a horrid comment that will make you hibernate below a duvet for months on end, pondering how on earth to rectify a smashed confidence. Thankfully that hasn’t been the case. If anything I’m more confident now than I’ve ever been about myself… at the end of the day, I’m a mere mortal, just like everyone else. I’ve good days/bad days/crappier than crap days but also days that I’m unbelievably thankful for what I’ve achieved in building my self-belief. Isn’t it amazing the influence a bunch of people who you’ve never met (and scattered all over the world) can make in building such positivity in your life?! Every time I’ve reached a blogging or YouTube goal it’s because of the support of others (aka YOU guys) and that’s something I’m incredibly grateful for.

Don’t get me wrong, I’m under no illusion that 1000 subscribers is a mere spec of dust on the moon compared to other channels – but for me, it’s a HUGE milestone. So once again THANK YOU blog buddies – for being not only the biggest part of my blogging journey but also my YouTube one too!

If you enjoy a sprinkle of beauty chatter and have a quick moment to pop by the Confetti & Curves YouTube channel then *CLICK HERE* to subscribe! Do feel free to say a quick hello and if you have a channel too, leave the link below and I’ll go check it out 🙂